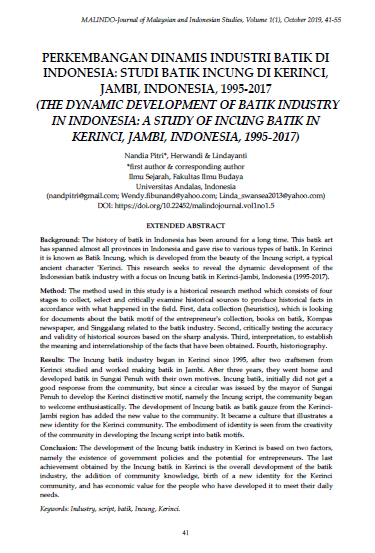 Background: The history of batik in Indonesia has been around for a long time. This batik art has spanned almost all provinces in Indonesia and gave rise to various types of batik. In Kerinci it is known as Batik Incung, which is developed from the beauty of the Incung script, a typical ancient character 'Kerinci. This research seeks to reveal the dynamic development of the Indonesian batik industry with a focus on incung batik in Kerinci-Jambi, Indonesia (1995-2017).

Method: The method used in this study is a historical research method which consists of four stages to collect, select and critically examine historical sources to produce historical facts in accordance with what happened in the field. First, data collection (heuristics), which is looking for documents about the batik motif of the entrepreneur's collection, books on batik, Kompas newspaper, and Singgalang related to the batik industry. Second, critically testing the accuracy and validity of historical sources based on the sharp analysis. Third, interpretation, to establish the meaning and interrelationship of the facts that have been obtained. Fourth, historiography.

Results: The Incung batik industry began in Kerinci since 1995, after two craftsmen from Kerinci studied and worked making batik in Jambi. After three years, they went home and developed batik in Sungai Penuh with their own motives. Incung batik, initially did not get a good response from the community, but since a circular was issued by the mayor of Sungai Penuh to develop the Kerinci distinctive motif, namely the incung script, the community began to welcome enthusiastically. The development of incung batik as batik gauze from the Kerinci-Jambi region has added the new value to the community. It became a culture that illustrates a new identity for the Kerinci community. The embodiment of identity is seen from the creativity of the community in developing the incung script into batik motifs.

Conclusion: The development of the incung batik industry in Kerinci is based on two factors, namely the existence of government policies and the potential for entrepreneurs. The last achievement obtained by the incung batik in Kerinci is the overall development of the batik industry, the addition of community knowledge, birth of a new identity for the Kerinci community, and has economic value for the people who has developed it to meet their daily needs.