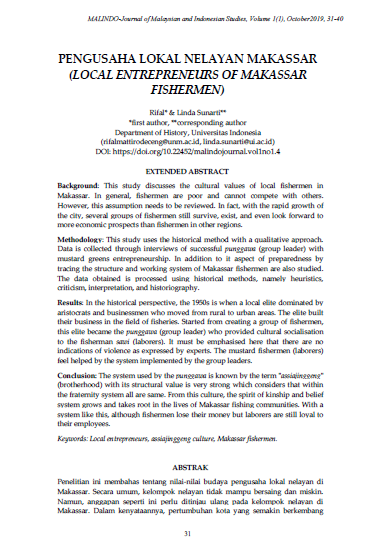 Background: This study discusses the cultural values ​​of local fishermen in Makassar. In general, fishermen are poor and cannot compete with others. However, this assumption needs to be reviewed. In fact, with the rapid growth of the city, several groups of fishermen still survive, exist, and even look forward to more economic prospects than fishermen in other regions.

Methodology: This study uses the historical method with a qualitative approach. Data is collected through interviews of successful punggawa (group leader) with mustard greens entrepreneurship. In addition to it aspect of preparedness by tracing the structure and working system of Makassar fishermen are also studied. The data obtained is processed using historical methods, namely heuristics, criticism, interpretation, and historiography.

Results: In the historical perspective, the 1950s is when a local elite dominated by aristocrats and businessmen who moved from rural to urban areas. The elite built their business in the field of fisheries. Started from creating a group of fishermen, this elite became the punggawa (group leader) who provided cultural socialisation to the fisherman sawi (laborers). It must be emphasised here that there are no indications of violence as expressed by experts. The mustard fishermen (laborers) feel helped by the system implemented by the group leaders.

Conclusion: The system used by the punggawa is known by the term "assiajinggeng" (brotherhood) with its structural value is very strong which considers that within the fraternity system all are same. From this culture, the spirit of kinship and belief system grows and takes root in the lives of Makassar fishing communities. With a system like this, although fishermen lose their money but laborers are still loyal to their employees.