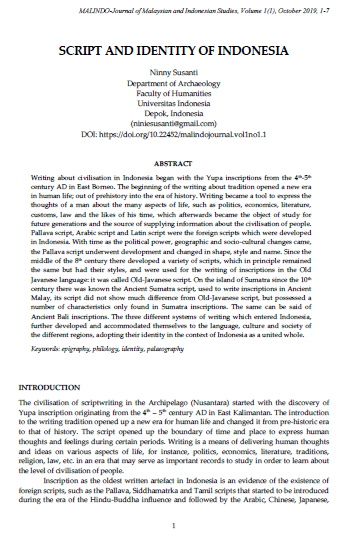 Writing about civilization in Indonesia began with the Yupa inscriptions from the 4th-5th century AD in East Borneo. The beginning of the writing about tradition opened a new era in human life; out of prehistory into the era of history. Writing became a tool to express the thoughts of man about the many aspects of life, such as politics, economics, literature, customs, law and the likes of his time, which afterward became the object of study for future generations and the source of supplying information about the civilization of  people. Pallava script, Arabic script and Latin script were the foreign scripts which were developed in Indonesia. With the passage of time as thepolitical power, geographic and socio-cultural changes came, the Pallava script underwent a development and changed in shape, style and name. Since the middle of the 8th century there developed a variety of scripts, which in principle remained the same but had their own styles, and were used for the writing of inscriptions in the Old Javanese language: it was called Old-Javanese script. On the island of Sumatra since the 10th century there was known the Ancient Sumatra Script, used to write inscriptions in Ancient Malay, its script did not show much difference from Old-Javanese script, but possessed a number of characteristics only found in Sumatra inscriptions. The same can be said of Ancient Bali inscriptions. The three different systems of writing which entered Indonesia, further developed and accommodated themselves to the language, culture and society of the different regions, adopting their identity in the context of Indonesia as a united whole.